In 1940, British novelist Graham Greene published The Power and the Glory, set in Mexico about the clandestine sacramental activities of the «whisky priest» at a time when Catholicism was prohibited in the State of Tabasco. We come to realize that he is the only cleric who has dared to stay and serve those he feels are in need of him. As daring as this is, he only ever seems to focus on his shortcomings: the fact that he once fathered a child there; his drinking; and the fact that he has to hide all that he does.

He is a man who will never know safety unless and until he leaves the state. Whether out of duty or compulsion he chooses to live in danger.

But Greene didn’t see it that way and I have come to agree with him. In one of the two quotes I cherish from this novel he says:

The argument of danger only applies to those who live in relative safety.

I can think of dozens of times where these worlds would have expressed my feelings so much better than my own. For instance, I used to live in Brooklyn and work a block from Grand Central Station in Manhattan. The majority of my coworkers lived outside the city—mainly upstate, Long Island, Connecticut and New Jersey. 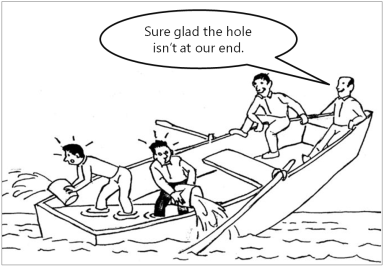 Sometimes I was asked how I got to work and my answer was that I always took the subway. «The subway?» came the answer, «but it’s so dangerous down there.»

I generally replied with this question, «When was the last time you took a subway?» The answer, almost always, in so many words: «I never do. It’s not safe down there.»

So those who live in relative safety usually do so in a restricted, and often privileged, environment. Anywhere else is met with the «argument of danger.»

As a final example, while living and working here in Chicago, I customarily vacationed in Colombia. The president of the company took me aside, on one of the few occasions we ever exchanged words, and told me I was «reckless and foolhardy» to go to such a dangerous place. I didn’t follow with my usual question because I didn’t feel well-off enough to retire on the spot.

Down in Colombia, and later in other countries, I met some truly marginalized people who seemed to have no options in life. They had to deal with each day as it came, and then went and did what they had to and never spoke of danger.

This was the lot of the whisky priest. In the novel he only feels true danger at one particular point in the story. To say more would spoil it for any would-be reader.